From the offset, Joker transports the viewer on a cinematic journey back in time via a retro Warner Bros logo to a bygone Gotham City. Indeed, the often utilised Tim Burton-esque gothic architecture is stripped away, and we are left with an unsettling cityscape where evil deeds can evolve undisturbed, although it’s never been experienced quite like this. Here, the city is unforgiving and nasty, much like the Joker himself, but it remains a vital extension to the Batman universe. 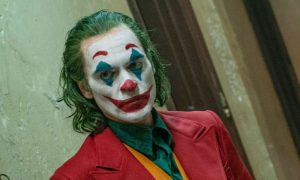 The antagonist Arthur Fleck / Joker (Joaquin Phoenix) a painfully unfunny clown / stand-up comedian, is presented as a victim at the mercy of his manipulative colleagues and indifferent employer. In fact, it is virtually impossible to not feel sorry for him and that is all part of the inspired psychological plot. Especially as most viewers know he will lose it eventually, the plot, that is! It’s just a matter of how and when it will happen. Indeed Fleck spends a great deal of time conforming to the demands of what is deemed acceptable within the narrow constraints of society, and then he just cannot take it anymore. 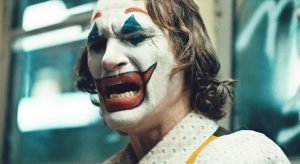 Although there is not an obvious transformation sequence, one experiences a genuine sense of dread taking hold as the harshness of reality unfolds. Being told you are not good enough – or not funny enough – is a bitter pill to swallow. Fleck’s stand up comedy is difficult to watch, mostly due to his terrible material that shouldn’t be funny – but just is – especially from a cinematic audience perspective! Furthermore, Fleck’s often disturbing uncontrollable outbursts of laughter is presented here as an illness… or is it? You be the judge… if you dare!

When Joker finally takes hold, he just doesn’t care and that’s half the fun, if fun is the right word! A Broadway style dance routine shows Fleck gleefully descending steps to eventual insanity, moments after the brutal slaying of an admittedly deserving associate, but does anybody truly deserve violence? A vital question indeed, explored to maximum effect.

The multidimensional performance by Phoenix is spellbinding. If vision is blurred, it is possible to see every incarnation of the Joker (a testament to Phoenix) and that really is the point. Anybody can go insane if pushed and ignored for long enough.

The unsettling but endlessly creative unreliable narrative keeps everything fresh throughout. We’ve all been guilty of exaggerating a tale for personal gratification and this opus takes that line of thought to another level entirely. Are we to believe what is happening? Does it really matter? Does anything truly matter, and if one throws caution to the wind or reacts with violence, do negative actions define us or is a dark destiny unavoidable?

In conclusion, Joker is a cautionary critique concerning the power of media interpretation. However, it is divisive in that it will deeply upset some and truly delight others. Is the violence too violent or not violent enough? Is the humour funny or not funny enough? Is the unforgiving environment too dark or not dark enough? We all have existential questions and this glorious exploration is brave enough to ask the most uncomfortable questions of all! Is this film over-hyped or not hyped enough? Just walk a mile in Fleck’s clown-sized shoes and discover what can happen if a man truly faces his demons!

Closing thought: all previous versions of the Joker attempt to get back at society in some fashion, whereas this Joker – without dropping any real spoilers – is a mirror to society. 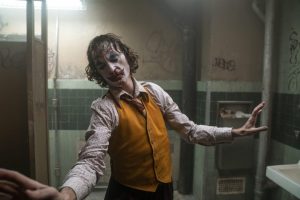 The Iconic Mini – “The Road Show” on Duggystone Radio 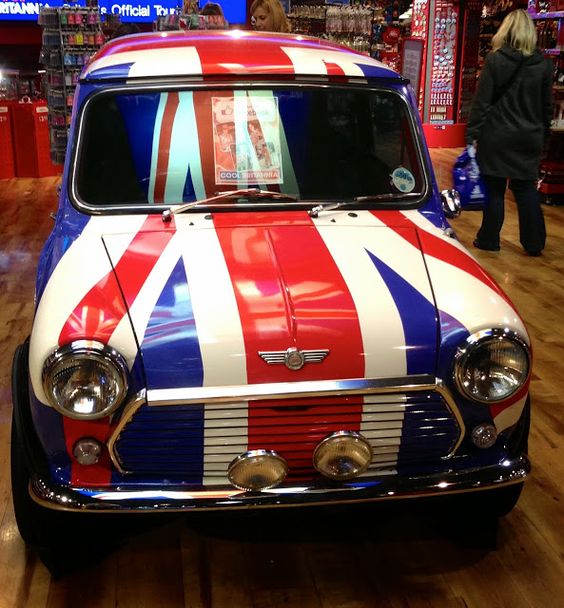 Reggae Show “One Year On” with Brian Travers UB40